Most of these posts were originally posted somewhere else and link to the originals. While this blog is not set up for comments, the original locations generally are, and I welcome comments there. Sorry for the inconvenience.

Orlando had a couple of teeth pulled today. When I picked him up this afternoon, the vet tech warned me that because of the anesthesia he wouldn't be hungry. I said "Orlando not interested in food??". Orlando said "challenge accepted".

When we got home he raced to where the food dish should have been and glared at me until I corrected that. I gave him a small spoonful, and he gobbled it up and looked at me as if to say "oh, we're doing appetizers now before the entrees? Well, I'm ready for the meal now". So I gave him more and he happily ate it. (And kept it down. :-) )

Keyboards: it's the little things

When I started using computers, keyboards were practically immortal. I stopped using my first keyboard when a couple keys physically broke such that I couldn't get the caps to stay on. My last couple keyboards have not fared so well.

I have an inxpensive Logitech keyboard. "Inexpensive" wasn't actually one of the governing criteria when shopping; I'm willing to pay for a keyboard that delivers higher quality. But what's locally available in stores tends to not be high-end, and I'm not going to spend real money on a keyboard I can't touch first.

The failure mode is irritating, though. My keyboard works fine in most respects, but... well, let me show you a picture: 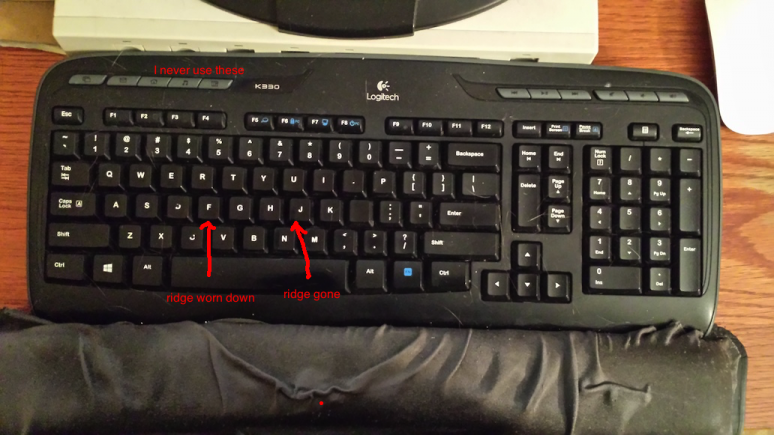 I can actually live with the worn-off letters because I mostly touch-type. (I'm mystified by what's special about 'L' and 'O'. No, not gaming hotkeys.) But, as a touch-typist, I rely on those little ridges on the 'F' and 'J' keys to tell me that I'm oriented correctly. In the days of typewriters that didn't matter much as you almost never took your hands off the keys, but with a mouse on one side and sometimes a drink on the other, plus things like arrow keys and paging keys, it's pretty essential to the way I use a computer.

My 'J' ridge is gone. And 'F' isn't doing so well either. WTF? That's supposed to be molded plastic!

(I'm open to suggestions, though keyboards are a matter of personal taste so I don't expect them. I require keys that actually have some depth to them; I hate the Mac flat keyboards, which is why I'm using a generic keyboard with my Mac. I also require "not clicky"; typing on anything makes some noise, but I want a quiet one as much as is feasible and definitely not one of the old-style extra-loud ones. I don't care about special keys or even, most of the time, function keys; you'll notice the pristine state of those keys in the photo, cat hair aside. I would prefer that Escape be full-sized. I need the little legs that raise the back of the keyboard.)

One machine-learning technique is to pit evolving neural networks against each other in cage matches and then learn from the results. This is called Generative Adversarial Networks (GANs).

At yesterday's Purim festivities somebody described the following cutting-edge research, and I remembered just enough keywords to be able to find the paper later:

Stopping GAN Violence: Generative Unadversarial Networks Samuel Albanie, Sébastien Ehrhardt, João F. Henriques While the costs of human violence have attracted a great deal of attention from the research community, the effects of the network-on-network (NoN) violence popularised by Generative Adversarial Networks have yet to be addressed. In this work, we quantify the financial, social, spiritual, cultural, grammatical and dermatological impact of this aggression and address the issue by proposing a more peaceful approach which we term Generative Unadversarial Networks (GUNs). Under this framework, we simultaneously train two models: a generator G that does its best to capture whichever data distribution it feels it can manage, and a motivator M that helps G to achieve its dream. Fighting is strictly verboten and both models evolve by learning to respect their differences. The framework is both theoretically and electrically grounded in game theory, and can be viewed as a winner-shares-all two-player game in which both players work as a team to achieve the best score. Experiments show that by working in harmony, the proposed model is able to claim both the moral and log-likelihood high ground. Our work builds on a rich history of carefully argued position-papers, published as anonymous YouTube comments, which prove that the optimal solution to NoN violence is more GUNs.

I haven't read the full paper yet, but on a quick skim it does not disappoint. More info.

I'm delighted to see that the paper was submitted to SIGBOVIK 2017. I had no idea that Dr. Bovik had his own SIG.

ETA: Not only was that paper submitted to SIGBOVIK, but SIGBOVIK is a real thing. How did I not know about this gem from my alma mater? (Sadly, this year's conference starts at 5PM on a Friday, which would be challenging. Maybe I'll have better luck next year.)